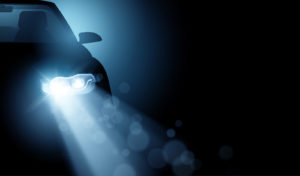 As the demand for adaptive headlights increases, and the cost decreases, the hope is that they will become available as a standard item on a wider variety of makes and models of cars.

According to National Safety Council data, 68 percent of fatal accidents in 2018 occurred between 4 p.m. and 8 a.m., during the latter part of the day and early morning, when it was darker out and harder to see. A driver’s ability to perceive depth, recognize colors, and react to something in the road is impaired at night, not to mention headlights from oncoming traffic, which can momentarily blind a driver.

The good news is that auto technologies like adaptive headlights – sometimes called active headlights or adaptive front-lighting systems – are helping drivers to see, and be seen, better at night, resulting in a safer and more enjoyable driving experience.

What are adaptive headlights?

In short, adaptive headlights are a safety feature that uses sensors to automatically adapt to low-light situations and conditions, such as when you’re driving around a curve or over a hill.

Consider how standard headlights work when you come upon a bend in the road, where there are no streetlights. As you prepare to turn at the bend, standard headlights would be focused straight ahead, at what’s directly in your midst, such that they illuminate the side road instead of what’s around the bend.

As a result, for a long moment or two, you are literally in the dark, unable to see what’s approaching as you make your turn around the bend. Is there a broken down vehicle in the middle of the street? Someone, or some animal crossing the road?

By contrast, adaptive headlights turn their beams as you turn the steering wheel, and are synchronized so that when you make the turn, your adaptive headlights respond in kind, shedding light on the road in front of you, where you are headed, not on the side street.

What are adaptive headlights’ advantages?

If you are climbing a steep hill, it’s the same phenomenon: standard headlight beams will point up towards the sky instead of staying level with the road. For a long moment, you will be enshrined in darkness, unable to see whether another motorist is coming.

The genius of adaptive headlights is that they move up or down according to the position of the vehicle. They react to the speed, steering radius, and level of the surface, then automatically adjust to what the driver is doing and the road conditions ahead. When the driver turns the steering wheel to the left, the headlights respond by angling to the left.

It’s also important to note that adaptive headlights don’t just make your driving experience safer, but also benefit other motorists on the road and pedestrians. Let’s return to the scenario where you turn around a bend on a darkly lit road, but this time an oncoming car is headed your way. As you round the curve, standard headlights would temporarily blind the driver.

With adaptive headlights, this won’t happen because your beams stay level with the road instead of shining a bright light intrusively on an unsuspecting driver.

Here’s how adaptive highlights work: Sensors monitor the speed of the car, how far you’ve turned the steering wheel, and other measurements, including the rotation around the vertical axis. Based on the data they have acquired, the sensors communicate with the headlights, prompting them when to rotate, in what direction, and how far.

In other words, adaptive headlights are extremely intuitive. They know, almost like an instinct, how you are driving; if you turn the steering wheel, however slightly, they will turn with you and adjust themselves accordingly, around the bend. Hit the accelerator, and your adaptive lights will recognize this movement, and automatically raise their level to enhance your visibility. Signal or apply the brakes, and the light beams will come down a level.

In an adaptive headlights system, sensors preclude the lights from turning when they don’t need to. If the car is moving in reverse or not going forward, the adaptive headlights won’t be triggered, ensuring that you don’t unintentionally blind other drivers. If you are idling or have parked your car, the lights will turn off automatically, so other drivers and pedestrians are not caught in your headlights’ bright glare.

Some drivers who want extra illumination and safety invest in cornering lights, in addition to adaptive headlights, which makes it easier to see during fast, sharp turns at night.

How adaptive headlights work is fascinating. The technology includes wheel speed sensors that detect how fast each wheel is rotating, a yaw sensor that monitors, for example, when a car turns a corner, and a steering input sensor that detects the angle of the steering wheel. The sensors feed the data to an electronic control unit, which uses it to ascertain how fast the car is going, and the angle and length of the curve it is navigating.

Based on this, the electronic control unit communicates with the headlights’ motors, prompting them to move their beams a certain range of motion – 15 and sometimes 30 degrees.

Are adaptive headlights worth it?

Currently, the vast majority of cars do not come equipped with adaptive headlights, according to the Insurance Institute for Highway Safety (IIHS).

If you buy them aftermarket, it could cost you close to $1,000. As more manufacturers begin to make adaptive headlights a standard item in new vehicles, the cost should come down and become more prevalent.

So, are adaptive headlights worth it? Ultimately that is for each driver to decide. If you have the discretionary income, investing in your safety, and that of your loved ones, is always worth it, even if the technology is imperfect.

Conventional headlights illuminate the area that is straight ahead, even when the car goes around a bend or up a steep hill. At night, especially in darkly lit roads and around curves, standard headlights are woefully inadequate. In addition, they can blind unsuspecting drivers, contributing to unsafe road conditions.

It’s also up to drivers to use the system appropriately and to drive attentively and safely. Adaptive headlights can’t account for people who drive excessively fast or exercise poor judgment or drive while they are fatigued, intoxicated, or distracted.