10 important things to avoid after a car accident 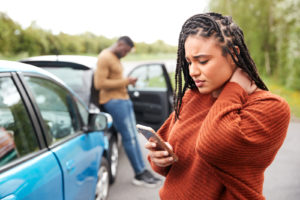 According to the National Highway Traffic Safety Administration, there are over seven million car accidents in the U.S. every year. A collision can be an overwhelming experience, physically and emotionally. Because of the shock to their system, drivers tend to get flustered and forget to take important precautions. This is true whether you are trying to remember what to do after a minor car accident or a more serious one.

While this is completely understandable in the heat of the moment, avoiding key responsibilities can put you at a legal disadvantage, compromise your safety and that of others, and make a bad situation worse.

Knowing what not to do after car accident is just as important as knowing what to do. If you or someone you care about is involved in an accident, here are 10 things to refrain from doing in the aftermath of a car accident.

Leaving your car in the road puts you and your passengers in harm’s way. There’s usually a sign directing drivers to pull over to the side of the road after an accident, and this is an essential step when you are considering what to do after a minor car accident. The longer your car remains in the flow of oncoming traffic, the more likely that another vehicle will inadvertently hit you, possibly causing more severe damage to you and your car. Move it first, then inspect the damage and call 911.

2. Don’t leave the scene of an accident.

This is serious business. Leaving the scene is not just morally wrong – it is a crime in many states and could cost you thousands of dollars if you’re caught, not to mention the possibility of community service and driving school. With the prevalence of cell phone cameras, the risk that somebody is recording you is very real. What to do after a minor car accident does not differ that much from what you should do if you are involved in a major accident. In both cases, don’t leave. It’s not worth it; take responsibility for your actions, and wait on the side of the road until officers arrive to take a police report.

While some drivers may over-react after a car accident, others tend to do the opposite, playing it cool and shrugging off any pain they may be experiencing. Maybe they’re concerned about missing time from work or just want to avoid a pile of paperwork; either way, it’s always preferable to consult with a physician as soon as possible. If left untreated, what you might dismiss as just a little whiplash could turn into a more serious problem.

What to do after a minor car accident is not that different from what to do if it’s a serious accident. In both cases, 911 should be contacted. Many drivers are under the impression that they shouldn’t call 911 unless someone is seriously injured in an accident. On the contrary, if you’ve been a party to a car accident, no matter how big or small, it’s in your interest to call 911.

An official police report can help establish the facts, including what caused the accident, names of witnesses, and who was at fault in the accident, which is important, especially in the event of a lawsuit. Also, failure to report a collision is an offense in some states.

A car accident can be a traumatic, emotionally charged experience. But, it is in your own interest to keep your temper in check after a car accident. Angrily confronting the other parties involved, even if you think the accident was their fault, does not serve a purpose and will not end well. Instead, try to remain calm and ensure that all parties to the accident get the help that they need.

6. Don’t forget to write down what happened.

After an accident, it is normal to feel both nervous and scared. But you must advocate for yourself, and that means taking the time to document everything that led to the accident. Write down as much information as possible; details that you may think are irrelevant may prove to be more important than you initially thought. Jot down details, including when and where the accident happened, a description of the road conditions, the license plate numbers of the other parties, as well as their names, contact information, and insurance providers.

Look around for witnesses and don’t be shy about approaching them, collecting their names and phone numbers, and asking for them to write down a brief factual statement of what they saw transpire. If you fail to document what happened, it will make it much harder for you to prove your side of the story in the event the case goes to court. And regardless, your insurance company will ask you to provide these details.

With the prevalence of cell phones, there is no excuse for not taking pictures after a collision. In fact, it’s one of the most vital things you can do to protect yourself and back up your side of the story. A good time to take pictures is after you have confirmed everyone involved is okay, and you have moved your car to the side of the road. Take pictures of the cars from different vantage points and of anything else, such as skid marks, that may provide insight into how the accident occurred.

What to do after a car accident that’s not your fault? For starters, don’t admit guilt. Even if you’re trying to be the good guy or gal, admitting fault at the scene of the accident – in a conversation with the other driver or their insurance company – is simply not in your interest. Also, while you may have already concluded that it was your fault, you could have misread what occurred. Either way, admitting fault can be used against you by the other party or their insurance company, who could use your statement to demand that you pay damages or to bring a lawsuit against you.

9. Don’t speak to the other party’s insurance provider until you are ready.

It’s a good idea to refrain from speaking with them until you have talked to – and given a statement to –your own insurance company, and have your ducks in a row. If the stakes are high, you may wish to have an attorney present when you speak with the other party’s insurance provider.

They may act like your friend, but the opposing party’s insurance provider’s interest is in getting you to settle your claim for as little as possible. Be prepared for them to ask you to record a statement about what led to the accident, and know that they may try to use your statements against you during the claims settlement process or in the event of a lawsuit.

While it is expected that you will share your insurance provider information with the other party, there is no reason to go beyond that. You don’t know them or their history, so it’s best not to hand over your driver’s license, phone number, or email address to the other party. At this early stage, the only ones who should have access to your personal information are the police officers on the scene.

Knowing what to do after a minor car accident or a more serious one can be a very unsettling experience. In the heat of the moment, it’s easy to forget what your responsibilities are. As disorienting as a car accident can be, drivers need to think and act clearly in order to protect their safety and security. This means, first and foremost, moving your car to the side of the road so you and any passengers are out of harm’s way. Then you can catch your breath, contact the authorities, and go about documenting what happened and why.

But always remember, knowing what not to do after car accident can be just as vital to your long-term interests as knowing what to do.

Finally, if you are seeking advice on what to do after a car accident that‘s not your fault (or even if it is), you might want to solicit the advice of an attorney.

Be safe out there!