Is It the Battery or the Alternator? 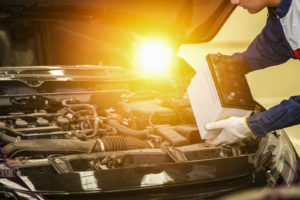 The alternator and battery have a mutually dependent relationship. When your engine is on, the alternator charges the battery, and in fact, it fuels all of your car’s electrical systems.

The alternator and battery work in concert to power your car’s electrical systems. When a battery is bad, your car will have trouble starting. And likewise, a vehicle can only run for a brief period of time if its alternator isn’t working.

If your car won’t start, it probably means you have a problem with your battery or alternator. Reducing it down to those two options – bad alternator vs. bad battery – means you’ve got a 50-50 chance of getting it right.

But you don’t want to guess. You want to get it right the first time. It is vital to know the difference between the symptoms of a bad alternator vs. bad battery because it can vastly improve your chances of getting your car started and not causing additional problems

Bad alternator vs. bad battery – how can you tell which one is causing the problem?

Use the process of elimination to find out.

Start by trying to jump-start your car. If it works, that may seem promising, but the big question is, can it start on its own? If it can’t, it’s probably a dead battery that’s causing your problem. The other possibility is that your engine will start for a brief moment and then lose power. This could mean that the alternator is not keeping the battery charged.

How to know if alternator is bad

In our bad alternator vs bad battery competition, we’ve only heard from one side so far. Now it’s the alternator’s turn. So, what are the signs of alternator going out? How do you know?

Some of the warning signs of alternator going out are similar to the signs of a dead car battery. Dim lights are a telltale sign, which makes sense since the alternator is part of your car’s electrical system.  Sometimes it might smell like something is burning due to friction from the belts.

Most modern cars, you don’t have to look for signs of alternator going out since they have a dashboard light that signals when the alternator is not working. But if you’re possibly having electrical problems, it may be a good idea not to rely on a computerized system.

How to tell if your car battery is dead

Your engine doesn’t start or barely turns over – both are possible signs of a dead car battery.  Another is dim lighting, inside the car and the exterior lights.  If the dashboard lights are dim, it most likely points to the battery. Check to make sure your lights, radio, and automatic windows are turned off; then start the car again.

Other signs of a dead car battery can be seen when you jumpstart your car. If the engine starts and remains running for a good amount of time, but you can’t start it again after you turned it off, then you probably have a dead battery and should replace it immediately.

Don’t get too emotionally attached to your battery. If properly maintained, car batteries can last up to seven years. On the other hand, an alternator is built to last until your car croaks, though that’s not always the case.

So, is it the battery or the alternator?

For your own safety, bring your car to the nearest auto mechanics shop to get your answer. The professionals can get to the root of the problem to ensure your vehicle can run smoothly for many years to come.