Why You Should Never Leave Your Pet in a Car 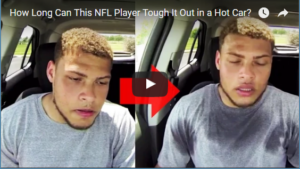 Fortunately for the dogs, cats and other critters we love, people have become more aware of the importance of pet safety in cars.  By now, most people understand that it’s not safe to leave their pets in hot cars on a hot summer day. But there’s more to pet safety than making sure you don’t leave dogs in hot cars. The truth is, you should never leave your pet unattended in a car because it’s not safe under any conditions. Here’s why:

The most serious danger to a dog left in hot car, as well as other pets, is from heat stroke, which can kill a pet in as little as 15 minutes. Even on relatively cool days, cars can heat up very quickly. Studies have shown that temperatures inside a car can reach up to 120 degrees in a matter of minutes. So when you step out of your car and the air seems cool, don’t assume it’s safe to leave your pet inside the car! Don’t assume that leaving your car’s air conditioner on will protect your pet. Air conditioners can overheat and break, leading to a very rapid buildup of heat in the car. They can also cause noxious fumes that overcome your pet. Even parking in a shaded area won’t guarantee your pet’s safety, as pets can still succumb to heatstroke in the shade.

Believe it or not, some people will actually steal pets out of an unlocked car, especially if it’s an expensive breed of dog or cat. Each year, thousands of pets are stolen from unattended cars in America, and leaving pets in a car can make them an easy target for thieves.

So there you have three fundamental principles of pet safety in cars: never leave a pet in a hot car, don’t rely on cracked windows or air conditioners to keep your pet cool, and don’t leave them alone in a car for any reason. Instead, play it safe when you go shopping or run errands in the car. Leave your pet at home or shop at pet-friendly stores where you can take it inside. If you happen to see a pet left inside a car showing signs of distress, call the local police or animal control right away.

Even when people know better than to leave pets in hot cars, they still do it far too often. That’s why hundreds of pets in hot cars die every year from heat stroke. Some of the most common and tragic reasons pets die inside locked cars include:

Nobody puts their beloved pet at risk on purpose, but unfortunately, it happens all too often. Usually, because people are in a hurry, they don’t understand the risks involved, or – like the drunk driver who gets pulled over by the police – they think “It won’t happen to me.” The #1 reason you should never leave your pet unattended in a car – for any length of time – is that cars can get hot very quickly. In fact, you may be surprised to learn just how fast things can heat up in a car.

Consider the experience of Arizona Cardinals safety, Tyrann Mathieu. When he took part in a video to show just how quickly temperatures can rise inside a car, the results were shocking. It took just over eight minutes for him to be completely drenched in sweat, call it quits and exit the vehicle. Just imagine how that feels to pets, especially those with long, thick coats trapped inside a sweltering car.


And don’t assume your pet will sit quietly waiting for you to return. Many pets, especially dogs, are very active in a locked car. This activity can further increase their body temperature, adding to the already hot conditions inside the car.

Fortunately, many states have begun to enact laws to protect pets from these situations. Currently, 16 states have dog in hot car laws that prohibit leaving animals in confined vehicles. Many of these laws include allowing people who are not the owner to rescue pets in hot cars from vehicles. For example, the state of Maine allows people to break a window when an animal’s safety, health or well-being is in immediate danger. This include situations of cold and inadequate ventilation as well as extreme heat.

The health of your pet can also make a difference in how it reacts to high temperatures in cars. Very young or old pets, those with thick coats, and pets that are overweight are all more prone to heatstroke. As mentioned, running the air conditioning while you’re gone isn’t a good idea, as it can malfunction or break. Plus, it runs the risk of building up noxious fumes in the car that could overwhelm your pet.

So why risk it? Be smart and leave your pet at home. Both you and your pet will be much happier!