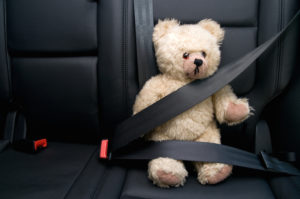 Every year in the U.S., about 40,000 people die in motor vehicle crashes. For people under the age of 34, car crashes are the leading cause of death. According to the National Highway Traffic Safety Administration (NHTSA), wearing a seat belt is the single most effective means of reducing the risk of death in a crash, and has saved close to 300,000 lives since 1975.

Without question, buckling up the seat belt is the most important safety measure for drivers and passengers in any kind of moving vehicle. Seat belts provide the best defense against impaired, aggressive, and distracted drivers. Research has shown that when used correctly, seat belts can significantly lower the risk of fatal and moderate-to-critical injuries in car accidents.

Another important seat belt safety fact: they also prevent drivers and passengers from being ejected during a crash. Ejections are one of the leading causes of fatalities in auto accidents, and those who don’t wear a seat belt are 30 times more likely to be ejected than those who do. More than 75% of people who get ejected during a fatal crash die from their injuries.

Any way you look at it, wearing a seat belt every time you ride in a motor vehicle is the most important thing you and your family can do to stay safe.

According to the NHSTA, the following states led the way in seat belt usage in 2017:

These states had the lowest rates of seat belt usage in 2017:

The good news is that 31 states showed an increase over 2016 in their seat belt safety usage. The other 19 either stayed the same or showed a decrease.

Pregnant women should secure the lap belt underneath the “baby bump” and across their hips. The shoulder harness should go across the chest, away from the neck, and to the side of the belly instead of across it.

Remember that the primary purpose of the seat belt is to keep you secure in your seat to minimize injury in the event of a crash. Airbags may offer additional protection. But, never use them as a substitute for seat belts.

Teaching Your Kids to Use Seat Belts

Most states require young children to ride in a properly restrained car seat until they reach a certain age, height, and weight, these laws vary by state. Children typically grow into wearing an adult seat belt between the ages of eight and 12. Some may reach the required weight and height requirements earlier. These vary from state to state, so check with your state DMV office before switching to an adult seat belt.

To determine a child’s readiness to switch from a booster seat to a regular belt, try the seat belt safety 5-step test. 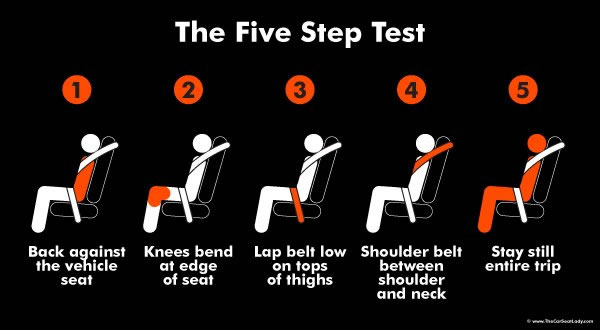 Most children are happy to grow out of the car or booster seat. However, it’s still essential to teach them the importance of seat belt safety every time they ride in a car, regardless of who they are with. Instilling this habit at an early age is one of the best things you can do for your children’s safety.

Parents should always set a good example by buckling up as soon as you get in the car. Whether you are driving or riding in a passenger seat, automatically fastening your seat belt sends a strong message to your children that they should do the same. Never take for granted that your kids will automatically buckle their seat belts – visually check to make sure they do.

Here’s another disturbing seat belt safety fact. According to the Department of Motor Vehicles (DMV), auto accidents are the leading cause of death for 15-to-20-year old’s in the U.S. Yet, teen drivers are the least likely to buckle up when riding in the car. They have many excuses for not wearing a seat belt, including “it’s not comfortable” or “it doesn’t look cool.” But, the most common reason is simply, “I forgot.”

The best way to make sure teens remember is to begin educating them about the importance of seat belt safety before they start driving. For example:

It is up to you as a parent to enforce that your teen driver is buckling up, be adamant about it, and don’t let them get away if you catch them without a seat belt.

Under federal law, all vehicles (except buses) are required to have a three-point restraint system that consists of a lap belt and shoulder belt. This restraint system must be worn by the driver and anyone else sitting in the front seat. Beyond that, seatbelt laws are regulated by states, and they vary significantly from one state to another.

Seatbelt safety fact: New Hampshire is the only state that does not make it against the law to drive without wearing a seat belt. All the other states do, although the degree of the infraction depends on the state. 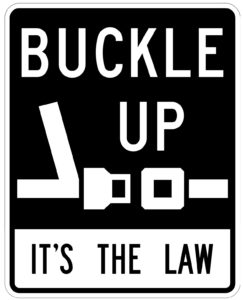 In some states, not wearing a seat belt is subject to primary enforcement. That means law enforcement officers can stop you and write a ticket if they observe you not wearing a seat belt. Other states consider it as a secondary enforcement, in which case police officers can only write a seatbelt violation ticket if they stop you for another primary violation, such as running a red light or speeding. Either way, the easiest way to avoid a penalty is by always wearing your seat belt.

State laws also vary for wearing seat belts while riding in a taxi or limo. Most states do not require wearing a seat belt while riding in the back seat. However, limos and taxis are not immune from an

It only takes a few seconds to buckle up. Do it every time you get in a moving vehicle, make sure it fits properly, and get to where you want to go safely. The life you save could be your own.