Is It Legal to Drive Without a License Plate? 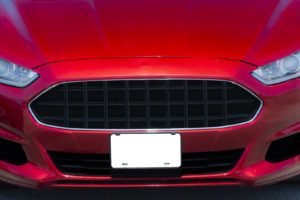 “Is it legal to drive without a license plate?” is a more complicated question than you might think. For starters, there is no national, one-size-fits-all law that addresses driving without license plate. It depends on the state in which you live.

To be clear, every driver in every state must drive with a back-end license plate. There are some infrequent exceptions, like when you’re driving home after buying a new car. But when it comes to front plates, the laws vary state by state. Some mandate it, and others don’t.

Let’s step back for a moment. Why is there suddenly all this interest in driving without license plate to begin with? Here’s what’s driving the trend: the recent crop of high end cars, like Tesla and Lexus, feature a smooth and curvy front end. Where on earth do you attach the front license plate? And were you able to pull it off, would it undermine the car’s visual style, beauty, and elegance? Would it look bad? Some drivers try to get around the plate law by positioning it against their windshield or stashing it in their glove compartment.

New generations of drivers see front ends with no license plate on some of these newer cars and wonder, “What gives? Fine, then I’m going to remove my front plate!”And then they get pulled over by the police or Highway Patrol and their defense is, hey everyone’s doing it. Sorry but that is just not going to fly.

Why are front plates important? States that have laws mandating front plates believe that the crime-fighting and public safety benefits justify the law. The police say that having both front and back plates makes their job of finding stolen cars much easier and faster. Police use License Plate Reader systems to find stolen cars, but the system only works when their high-speed cameras can get a good picture of drivers’ license plates as they speed by.

Also, imagine that a crime takes place. In states that only require one license plate, it is harder for bystanders and witnesses to find the plate as the suspect speeds away.

What does the law say?

As we mentioned, there is no federal or national law or standard addressing this. It’s left to each individual state to decide for itself. State license plate laws tend to be pretty straightforward. Plates need to be visible and have current tags, and they must be properly attached to the car in the provided space.

Most states that mandate both a front and back plate are in the northern part of the country, with the exception of Texas and Hawaii. All West Coast states including California require front license plates and the same goes for East Coast states.

According to one source, there are 19 “no license plate” states. Most of these states, which don’t force their residents to display a front plate, are located in the south and east part of the country:

What will happen if you get caught driving without license plate? Can you get a ticket for no front license plate? Again, it varies state by state. In California, you could be fined for driving with no license plate, but more likely you’d get a verbal warning or a fix-it ticket for between $100 and $200. With this kind of ticket, you can get it dropped once you show the police department that you fixed the problem. In some cases, it’s as easy as emailing a pic of your newly installed front plate.

In California, new car owners used to have six months from the time of purchase to install their plates. To circumvent the law, legend has it that Steve Jobs would trade in his car every six months. On Jan. 1, 2019, California lawmakers closed the “Steve Jobs loophole” by reducing the time owners have to install their license plates from 120 days to 90 days. They made another change too. Now, when Californians drive off a car dealership with their new or leased car, their license plate must carry temporary tags.

States allow for common sense exceptions. Most give new car owners a temporary license plate that they can display under the windshield until they install their plates. Washington state allows for an exception for vehicles like the Tesla that don’t have a designated space for a front plate. To qualify for the no license plate exception, Washington state residents must first obtain authorization from the Washington State Patrol.

Clearly there are two sides to this story. The front plate laws may be a hit with the police, but they remain unpopular with some drivers, especially owners of sports cars, classic cars, and some foreign cars.

Not only are the laws on the book in each state different but they are always changing. In 2017, several states introduced bills to change their laws mandating front plates. Ohio is the most recent state to amend its law and allow drivers to go plate-less, at least on the front side of their car. To express your opinion, contact your state representative.