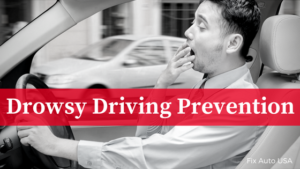 The holidays are a time to become more aware of the dangers of drinking and driving. But, there’s another type of impaired driving that can also lead to serious, and sometimes fatal, car accidents – drowsy driving. 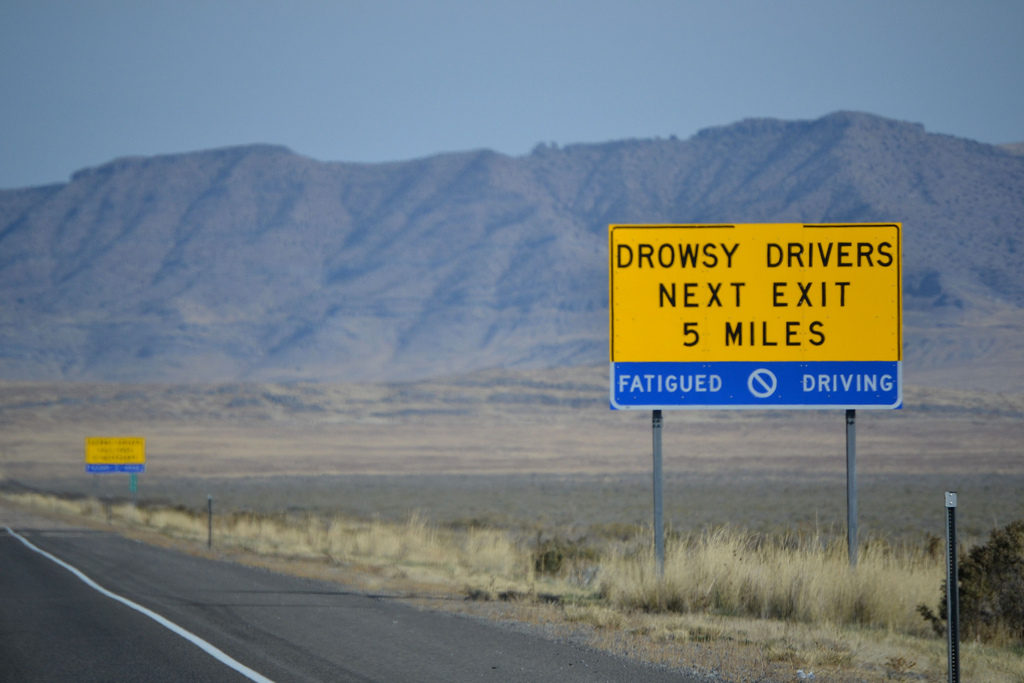 Drowsy driving causes up to 100,000 car accidents a year.

As with alcohol and drugs, drowsiness and driving do not mix. Drowsiness slows reaction times behind the wheel, decreases awareness and impairs judgment. It can interrupt how you process information and increase moodiness and aggressive behaviors – all of which significantly increases the risk of having an accident.

The National Highway Traffic Safety Administration (NHTSA) estimates that drowsy driving causes up to 100,000 car accidents and more than $12 billion in losses each year. $12 billion! Furthermore, a recent study by the AAA Foundation for Traffic Safety reported that 16.5% of fatal crashes involved a tired driver.

When and Why Does Drowsy Driving Happen?

Accidents caused by drowsy driving usually happen late at night, but they also frequently occur in the afternoon. They typically involve a single vehicle, with only the driver in the car, that veers off a highway. Because they are drowsy, if not asleep, the drivers in these situations rarely attempt to avoid the crash.

Factors that lead to drowsy driving include sleep loss, extended driving hours every day, driving during the middle of the afternoon, and driving for long hours without taking a break. Medications such as antidepressants and antianxiety can cause drowsy driving, as can untreated sleep disorders, including narcolepsy and sleep apnea syndrome. Of course, consuming alcohol, even just one or two drinks, can increase drowsiness in the driver, aside from being impaired. 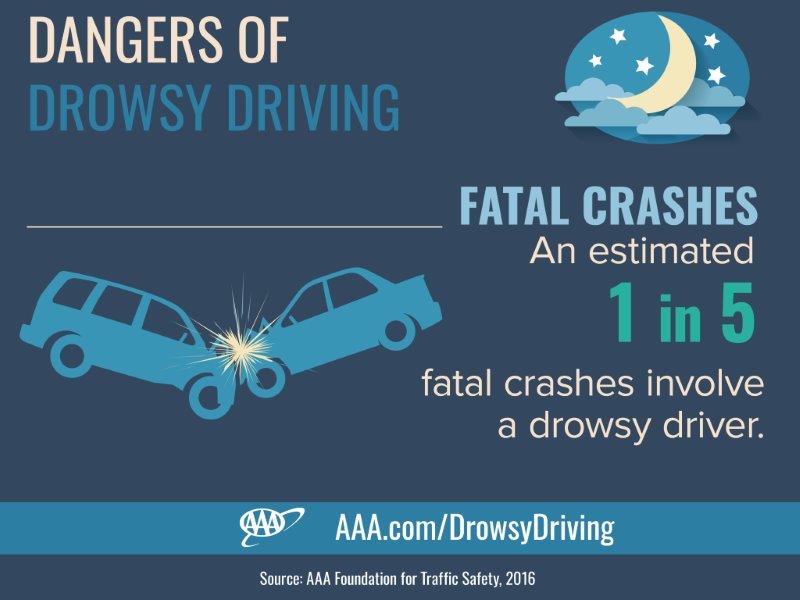 Anyone can fall victim to drowsy driving. However, three unique groups exhibit the highest risk for this dangerous behind-the-wheel behavior:

The main problem with drowsy driving is that people usually aren’t aware of it. If you’re on a long trip or driving late at night, look for the following symptoms:

If you notice one or more these symptoms, it’s time to let someone else drive or pull over and take a rest break. 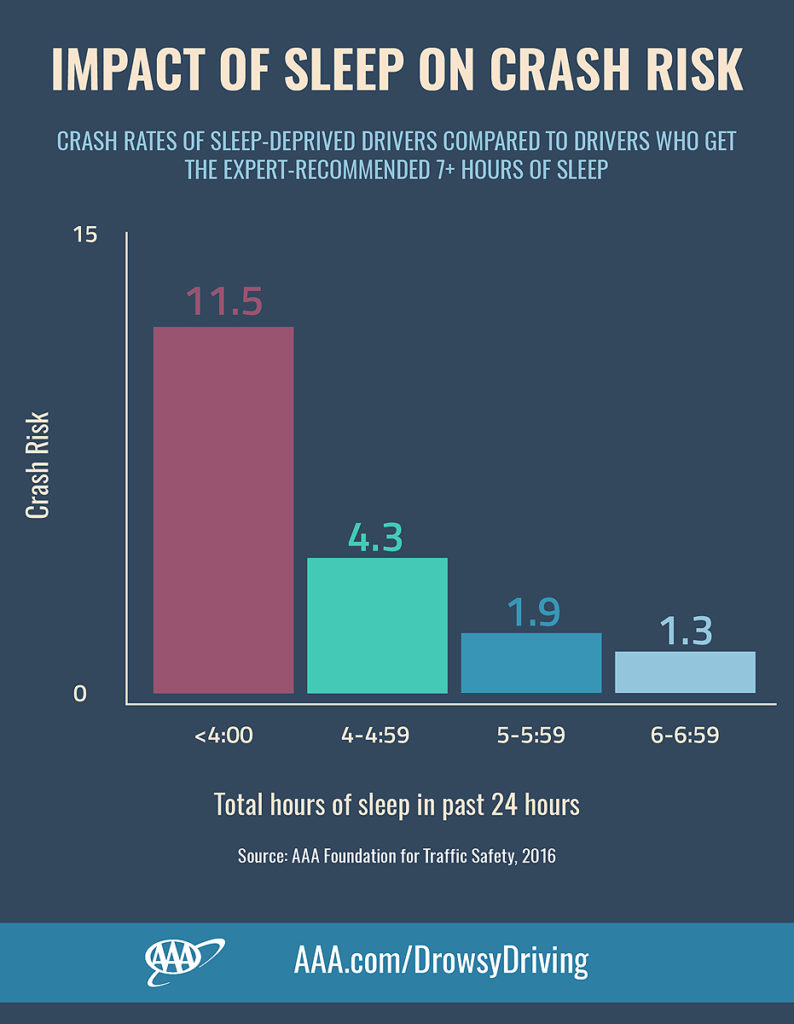 Once you’ve had too much to drink, the only safety prevention is to hand over the keys and let someone else drive, or call your favorite ride sharing service. Fortunately, there are many steps you can take to avoid drowsy driving.

Before you start driving and once you’re on the road: 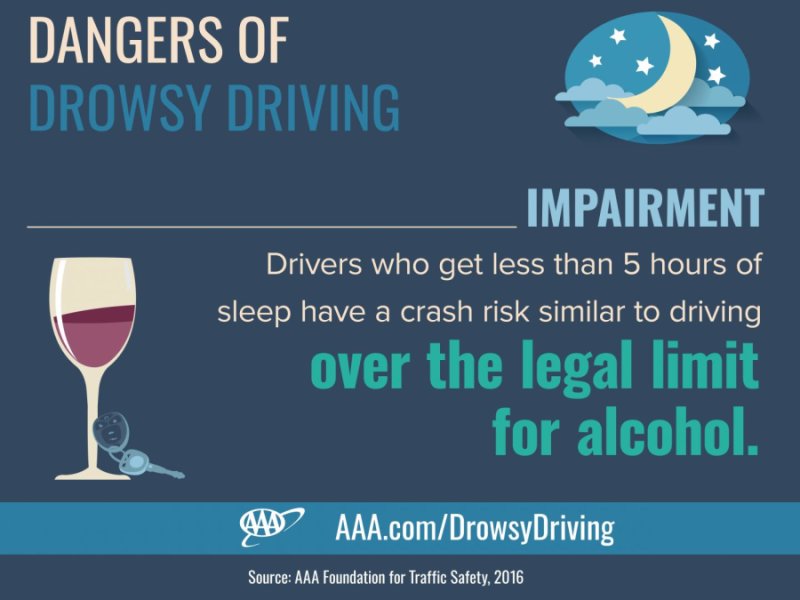 According to AAA, drivers with less than 5 hours of sleep have a similar crash risk to driving under the influence.

Once you get behind the wheel and set off toward your destination:

Contrary to popular belief, opening the driver-side window and listening to the radio have not been shown to improve alertness when you are drowsy.

The preponderance of evidence shows that drowsy driving should be avoided at all costs. Plus, many states are currently considering legislation that would hold drivers criminally negligent for injuring or killing someone while driving without adequate sleep.

So, do yourself and everyone else on the road a favor. If you notice any drowsy symptoms while driving, don’t try to “tough it out” or talk yourself through it. Pull over and rest, or let someone else drive!