5 Reasons You Should Repair That Car Dent Sooner Than Later 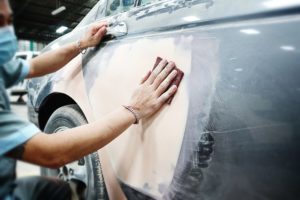 If you own a car long enough, this thought has probably popped up in your head at one time or another: I wonder how to fix a small dent in my car. No matter how carefully you drive or how well you take care of your vehicle, you will probably end up with a car dent or two sooner or later.

Auto body dents can occur for many different reasons, such as somebody opening their car door into yours, or a careless driver bumps into you from behind during a traffic jam and puts an unsightly dent in your fender. Perhaps you accidentally throw a baseball into your car while playing catch with your kids.

Often, people have no idea how the dent got there. They walk out to their car one day after work and there’s a dent in the side panel that wasn’t there before. If you’re lucky, the person that caused the dent will leave a note with their contact information. If not, you’re on your own, which can be very frustrating.

When and How To Fix a Dent In a Car

If you have the tools and experience in how to fix a dent in a car, you may be able to do the repairs yourself. In most cases, you should take your vehicle to an auto body shop to have the dent repaired by professionals. This is usually the better option to avoid rust or any other issues down the line. That is especially the case if you’re researching how to fix a bumper dent.

However, the main issue isn’t how you get it fixed, it’s when. If it’s a large dent, most people will get it fixed right away. But, when it’s only a small dent, it can be easy to put off delaying repairs. You tell yourself it doesn’t look good, but it’s only a minor blemish. Or, the car is getting older, so a minor ding here and there doesn’t really matter. Or, you tell yourself you’ll get it fixed sooner or later, just not today. So, you put it on the back burner of your to-do list and somehow it never seems to get done.

Next thing you know, six months or a year have gone by and that car dent is still there. Only now it’s looking bigger and uglier than when you first got it. So, you begin thinking, “I really need to get that fixed,” but somehow a good reason for continued delay always seems to get in the way. Meanwhile, who knows what’s happening to your car underneath the dent?

It’s human nature to put off small tasks that don’t seem urgent or overly important. But, a dent in your car is anything but unimportant, no matter how small.

Why You Should Repair Car Dent Sooner Than Later 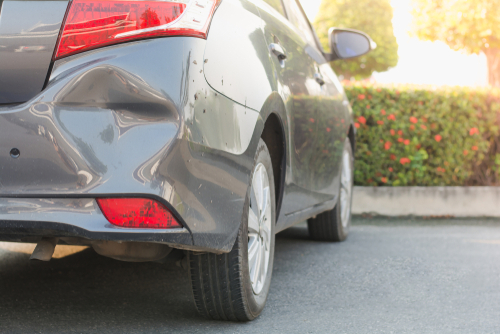 Whether you try to repair the dent yourself or take it to a professional body shop, the best approach is to fix it as soon as possible. That way, you don’t have to look at the dent every day, and have that little voice in the back of your head nagging you about when you’re going get it fixed. In addition, here are five good reasons for fixing car dents as soon as they happen, not when you eventually get around to it.

Dents cause unsightly blemishes on your car. But, the real problem is the damage they can cause to the paint. Cracks caused by the impact can allow water to seep underneath the paint and clear coat where it will reach the unprotected metal part of the car. Over time, the water will cause the metal to oxidize, causing rust spots. If the dent’s size and the damage to the paint are small enough, you may not notice the rust at first. By the time you do, there’s a good chance it will have expanded in size, making it bigger and unsightly compared to the original dent.

2. Long-term damage to the paint.

Another issue to considering when deciding how to fix a dent in a car is that it often involves more than just pounding out the dent. If there are scratches on the dent, you will also need paint repair as well, which involves another skill that most people don’t have experience with. This can lead to postponing the repair, which can lead to further damage to the paint.

When you ignore the paint damage that occurs with a dent, it will invariably get worse. Weather conditions, everyday wear-and-tear, and even washing your car can cause the cracks in the paint to grow larger. This can lead to flaking and peeling, leaving the underlying sealant exposed. If the car dent is severe enough to damage the sealant as well, peeling paint can leave bare metal exposed. Once the metal is exposed to the elements, it’s only a matter of time before it starts to rust.

No matter how well your car runs, the exterior appearance is an important factor for anyone looking to purchase a used car. Things like unrepaired dents can lower the value of a used car, even if they’re small. Add paint damage and rust spots to these car dents, the price a buyer is willing to pay goes down even more. Furthermore, unrepaired dents are a sign of a neglectful owner. Potential buyers may wonder what else is wrong with the car, such as the engine, brakes, or other parts. Unless your car is old and in poor condition overall, fixing any dents can be a simple step to bring up the value of your car.

Fixing car dents right away will invariably cost less than if you wait. It doesn’t take long for rust spots to appear or paint to start flaking away. If you live in areas with a lot of salt in the air (along the coast) or severe weather, the damage will spread even faster.

When it comes to car maintenance, safety is always the #1 priority. Even small dings and car dents can mask underlying structural damage that isn’t obvious on the surface. For example, today’s flexible bumper covers with plastic outer coatings are designed to minimize damage in low-speed collisions. Yet, the underlying damage can often be much worse than it looks on the surface. If you get in a head-on or rear bumper collision that damages the quarter panel, it could bend the underlying metal. This can lead to front- or rear-end instability that could compromise vehicle safety and cause an accident.

6. Get Your Dent Fixed By Professionals

Even if you have some skill with minor car repairs, you are probably better off taking a bumper dent to an auto body shop. Today’s bumpers are often made with high-tech materials that require special tools and expertise. Keep in mind that bumpers provide important protection for the rest of the vehicle in the event of any collision. So unless you really know what you’re doing in terms of how to fix a bumper dent, leaving it to the professionals is the better choice.

You can find many websites that offer do-it-yourself methods for how to a fix bumper dent. But a poorly repaired bumper doesn’t look good, and can lead to ongoing problems.

There’s one final reason to fix car bumper dents right away for many car owners – the pride of ownership.  If you care about your car’s appearance and take good care of it with regular washing and waxing, it doesn’t make sense to leave a bumper dent unrepaired.

So, the next time you’re confronted with the “how to fix a small dent in my car” situation, don’t wait. Bring your car to the Fix Auto collision repair center in your neighborhood. We’ll repair your dents quickly, safely, and accurately. We’ll make sure the paint color matches perfectly. And, we’ll have you back on the road before you know it.